The past three Fridays I have been working with the Cocoa Daisy "Under the Sea" kits from June 2017. I beefed up my kit with some items from the freckled fawn July kits. I found out that they offer the items that are in their monthly kits as an individual purchase, so I splurged and got the amazing vellum alphabet stickers, some labels and chipboard stickers that in my opinion went perfectly well with the Cocoa Daisy kit. Here are the three layouts that I created and also links to the process videos. 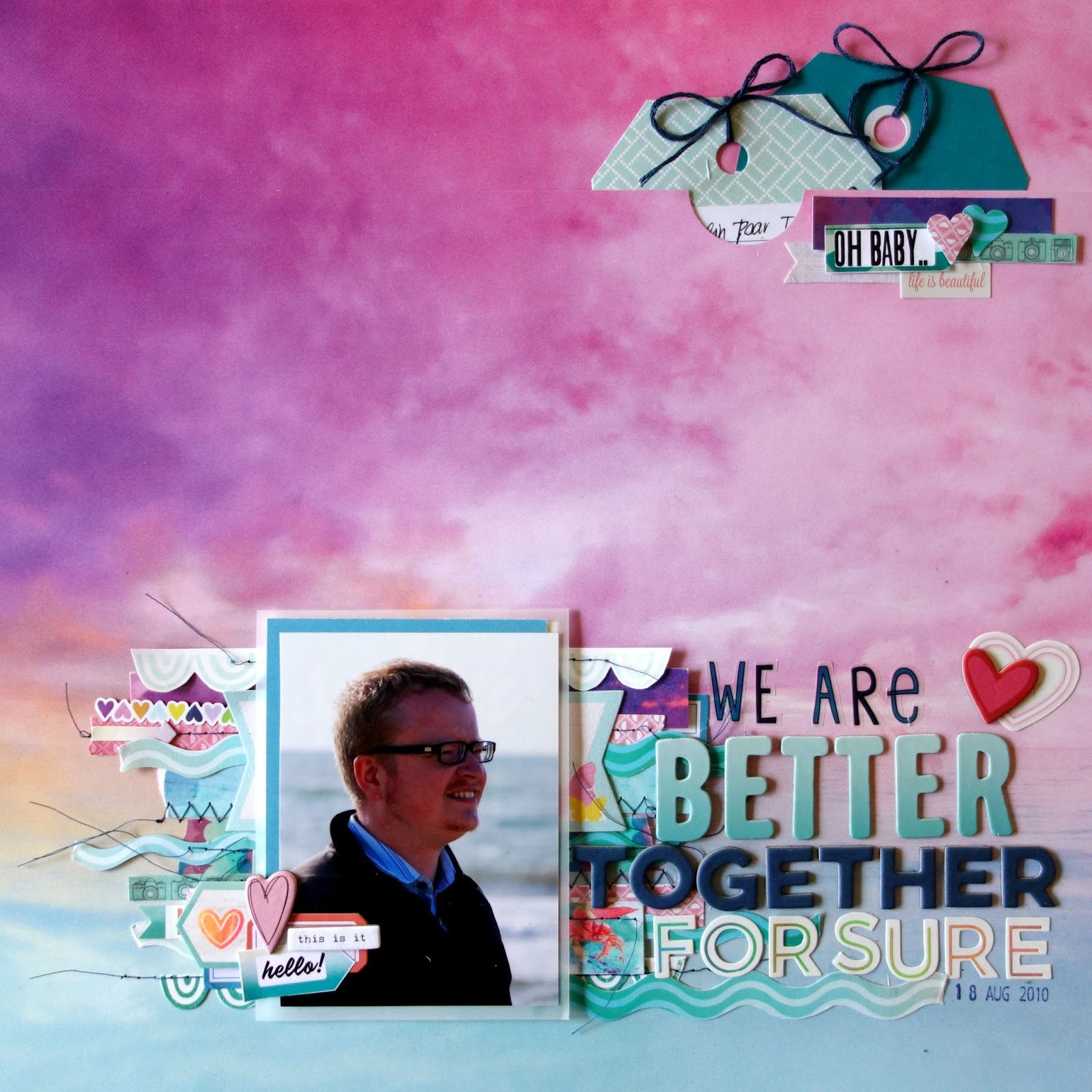 The first layout was loosely based on this September 1 Stuck?! Sketches sketch. I wanted to use those tags that were included in the kit but they were just too big to be placed where the sketch suggested. So I had this idea and thought it was brilliant. I cut the paper in two pieces, created a pocket behind the page and then reassembled the paper. Lately, I have been enjoying combining different alpha stickers and creating fun titles, it seems to be a thing because there will be another fun, long title layout in this post. To find out more about my thought process here is the link to my video. 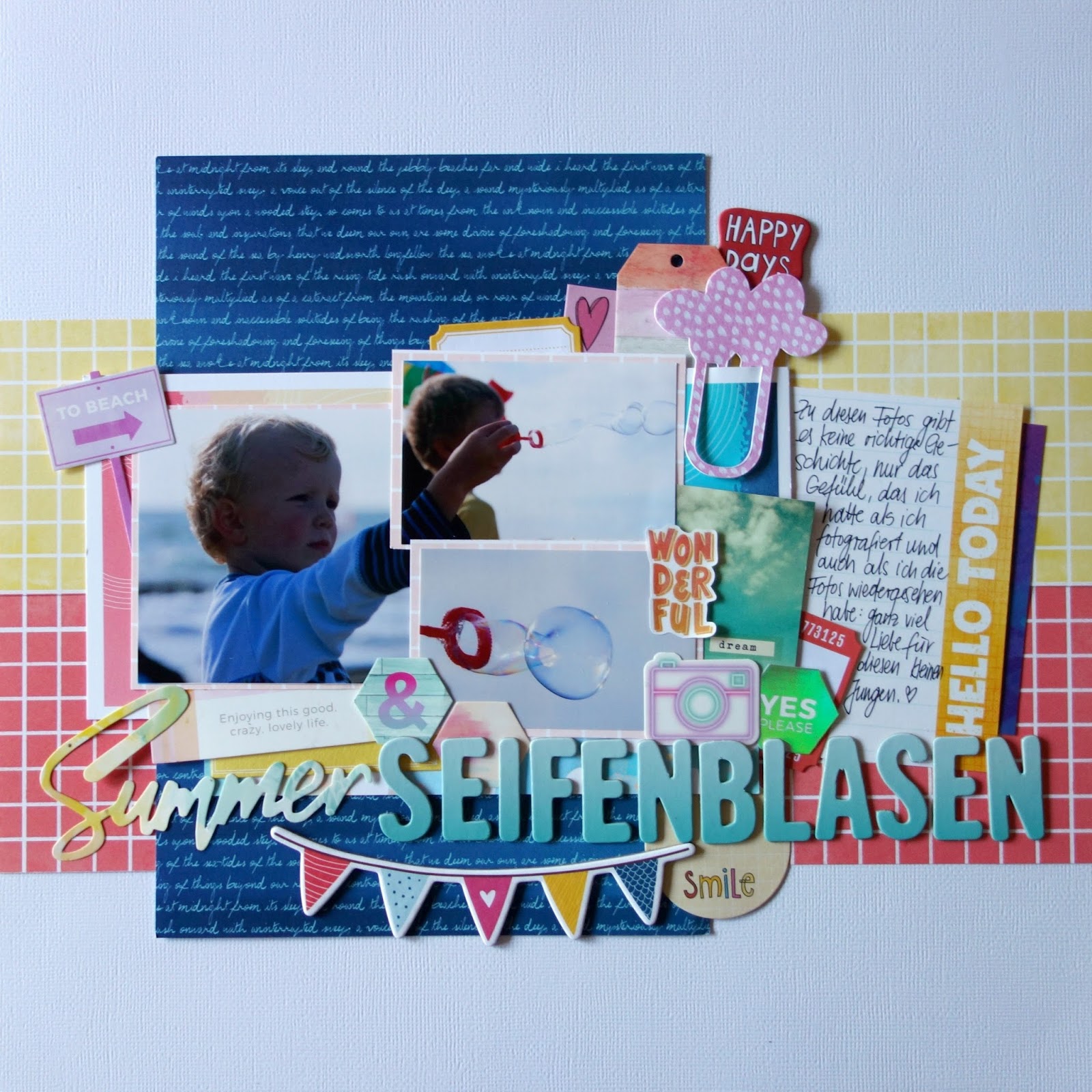 Then I created this "Summer Seifenblasen" layout. I wanted to incorporate three photos and struggled quite a bit until I realized that they did not have to be the same size. After that "aha"-moment, things came together quite easily. I was surprised how easily the leftover items from the Cocoa Daisy planner kits worked on the layout. I had never really considered using planner stuff for scrapbooking and just dumped all my matching items in my box. And then I constantly reached for them, so it was well worth the dump. I am definitely going to do that again moving forward. Here is the process video for this layout. 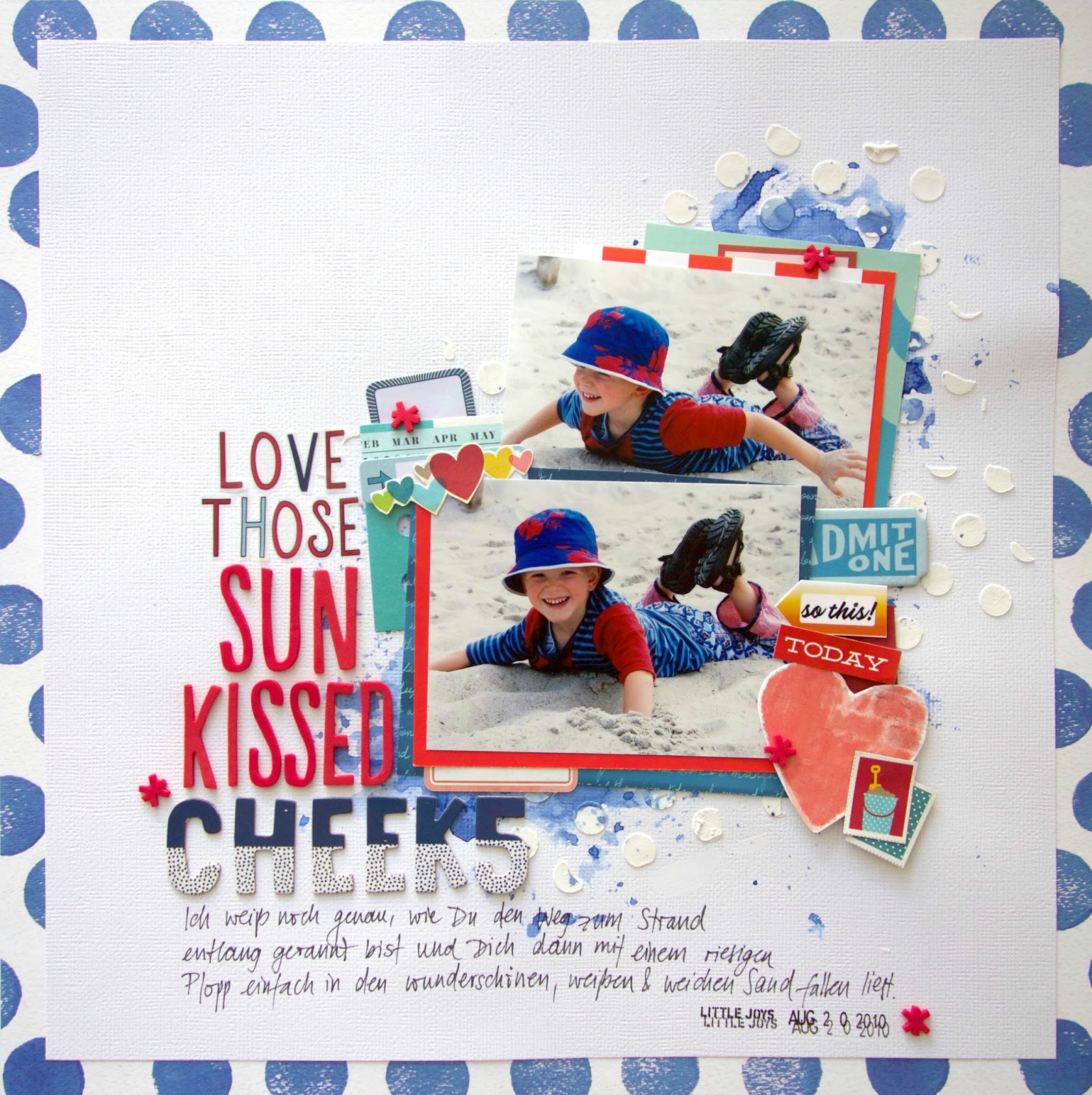 And finally another fun playful title. I found it on a journaling card that I used as a layering piece behind one of my pictures. I loved the background paper with the blue circles so I decided to repeat the pattern by using some texture paste with a dot stencil and blue watercolors. I then created my photo cluster on top of the dried mixed media so that only tiny bits would be visible. After I had a basic idea of the photo cluster, I worked on my title that I tried to nestle close to the photo cluster. If you want to see how this layout came together, check out my process video.
1 comments
Email ThisBlogThis!Share to TwitterShare to FacebookShare to Pinterest 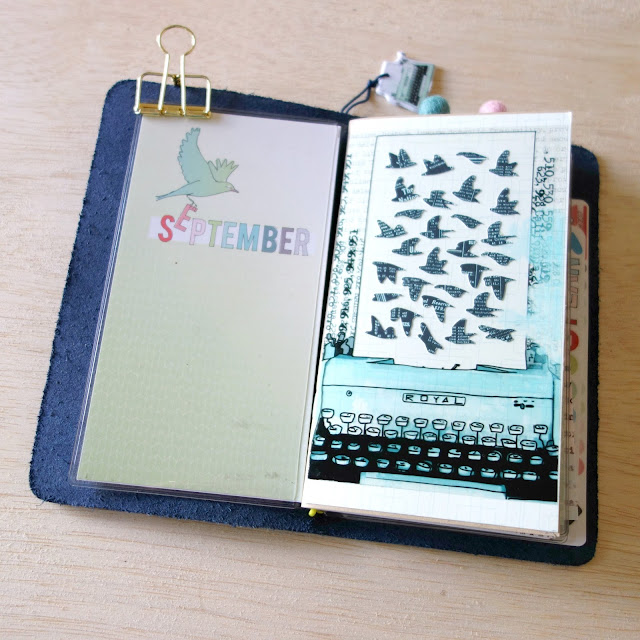 September Planner Setup in foxyfix Boss Babe Kate No. 4 single
As you know I have been planning in a Daisy Dori from Cocoa Daisy since March. And ever since then I have been adjusting my planner system on the quest for planner peace. I have finally come to realize that having planner peace for me means having a system that will easily adjust to my needs. And that it doesn't mean having a fixed setup and layout each and every month. For September I tweaked things a little again and actually filmed two setup videos: My September Planner Setup as well as my September Journal Setup.

I tried having a separate social media insert in August and even though I really like the idea, it made me realize again that I am a "one planner/insert type of girl" - so I merged my daily planning and my social media insert into one. I gained some space in my daily planning insert by putting the weekend days together on one page since I never really plan on those days. This way I was able to have an Instagram list, a budget tracker, an ideas page as well as a monthly catch all to do list in addition to my usual pages: my meal planning and my goals page. 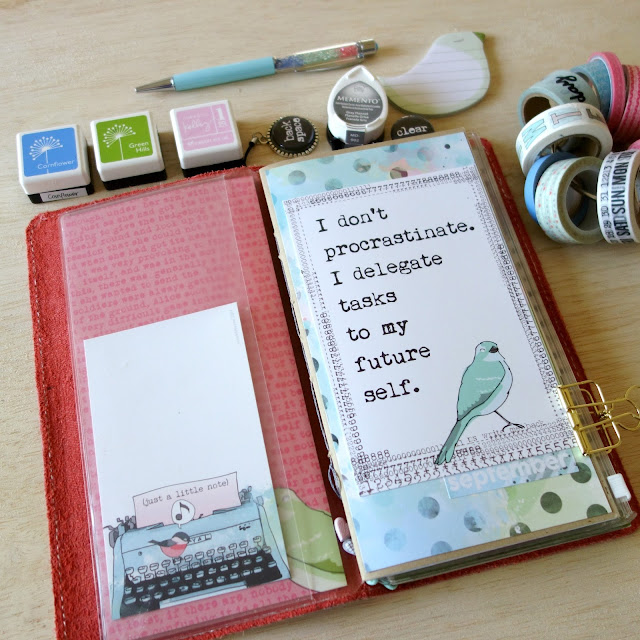 September Journal Setup in foxyfix Botanical Poppy No. 6 single
Even though I really like my monthly journals and how they turn out once they are finished, they are a lot of hard work. I actually stopped Project Life for 2017 because I was so overwhelmed by it and replaced it with the journals thinking this was much easier to do. This is clearly not the case. Creating these weekly memory planning spreads is something I really enjoy doing at the moment but then filling up the rest of the insert is becoming more and more of a struggle. First of all, I think I need to let go of guilt tripping myself when I don't finish an insert, having blank pages is not a failure. Then I need to rethink my approach: maybe printing larger pictures will do the trick or adding a quote, a beautiful card or adding more ephemera will also help. I am already thinking about my plans for 2018 ... right now, they are very frightening because I would move out of a traveler's notebook for memory keeping. *shock* I'm not ready yet to let go but I'm thinking about it. Here is my Journal Setup for September: 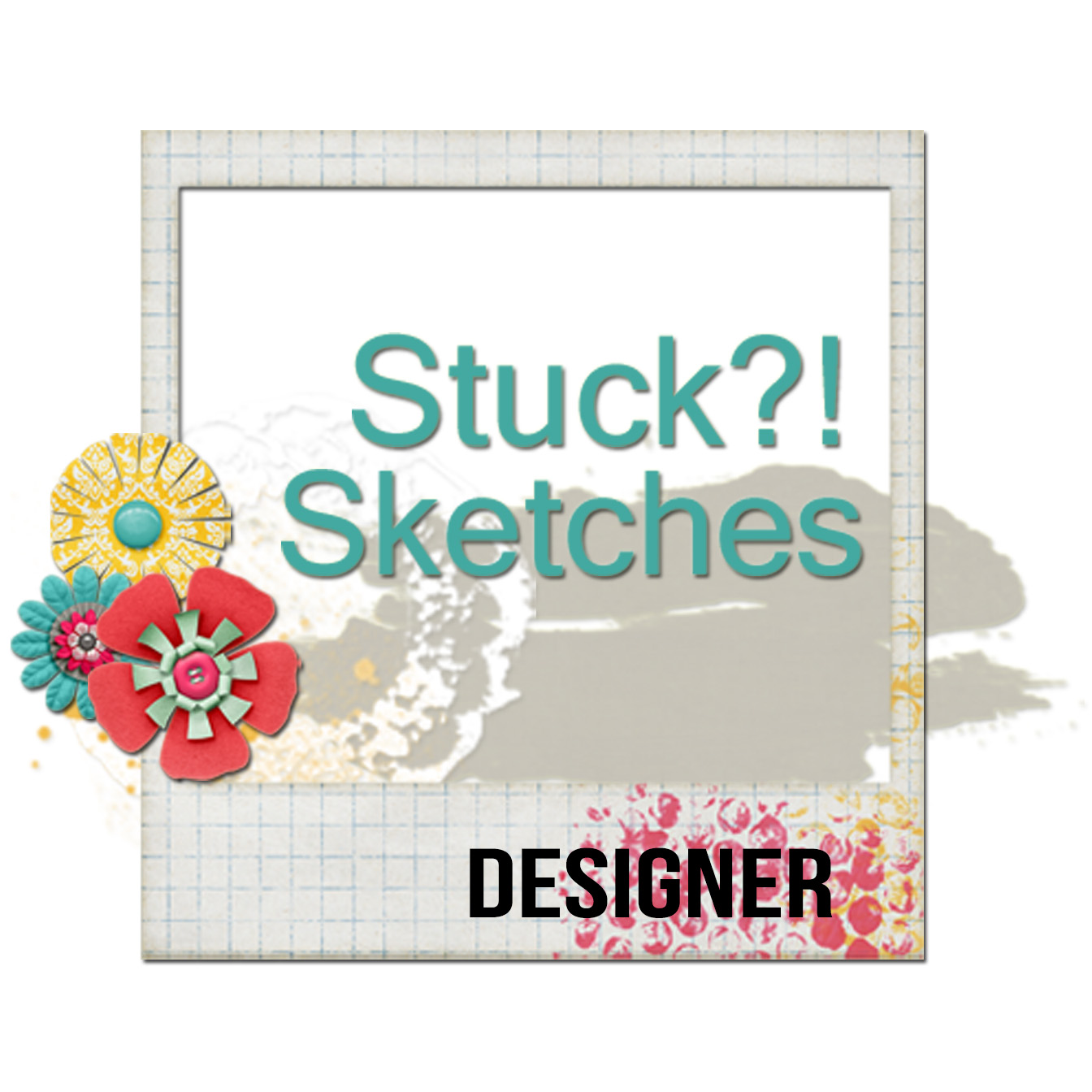